Update 2021.0: The Deep Breath Before the Plunge

We’ve got a massive update for you! But first, some backstory:

Writing software is hard. It’s especially hard when it’s your first project. When we first started making Relight, David had very limited experience doing software development. Relight, even the initial launch, was his first project by about 100x in terms of complexity and features.

Because of this, his goal was to write things quickly and just get something out the door. We wanted to make something that showed everyone our idea in a real and usable way. We didn’t want to care too much about how sustainably the majority of that code would be. It was messy by design so that we could get to a usable product and see if people liked it enough to warrant going back through and rewriting things properly—something which, when David started, he didn’t even really know how to do.

When we first started the project, development happened very quickly and we were sometimes releasing new features or content a couple times a month, even though David was only able to spend 4–9 hours on it per week. As the messy ball of code got bigger and bigger, it became harder for him to make changes and add things. This was expected. We looked at how the app was being received and we decided it was worth taking the time to rebuild it in a more proper and easier to maintain way.

Then COVID hit. Then forest fires in Colorado hit. Then the need to put in extra hours at work hit. Then we got COVID ourselves. Then David’s Dad needed to get heart surgery. All of this significantly delayed development. We thought we’d have things done on this update back in the summer, but here we are in March. Anyway, it doesn’t matter now because the update is live!

All of this is to say, there were a great many reasons why the updates slowed over the last year or so. But with this significant rewrite, adding new features and content is going to be significantly easier. 2020 was a sort of deep breath, required to build up what we needed to plunge in and start adding lots of new cool stuff. And we’re super excited to get started on it.

Changes in this Version

Often when software companies do rewrites, they push a big update and they’re really excited about it, but users aren’t so much because they can’t see any of the new stuff. It’s all just in the code and at best they might notice better performance. It’s like getting socks for your birthday. We didn’t want to do that to you, so we have thrown in some toys, as well as socks.

The icons we were using were licensed for web, but not for use in native apps—which we want to build soon. So Sarah went through and made new icons all over the site! A few of them are above, but if you can spot them all, you get 400 Relight Bucks!*

*Relight bucks are made up.

This one is pretty simple. Let’s say you open up the lightbulb icon on a bunch of verses and then you open up some commentaries and some cross-references. Now if you refresh the page, or quit and relaunch your browser, or navigate away and then come back to that chapter days later, all the stuff you opened will still be open. 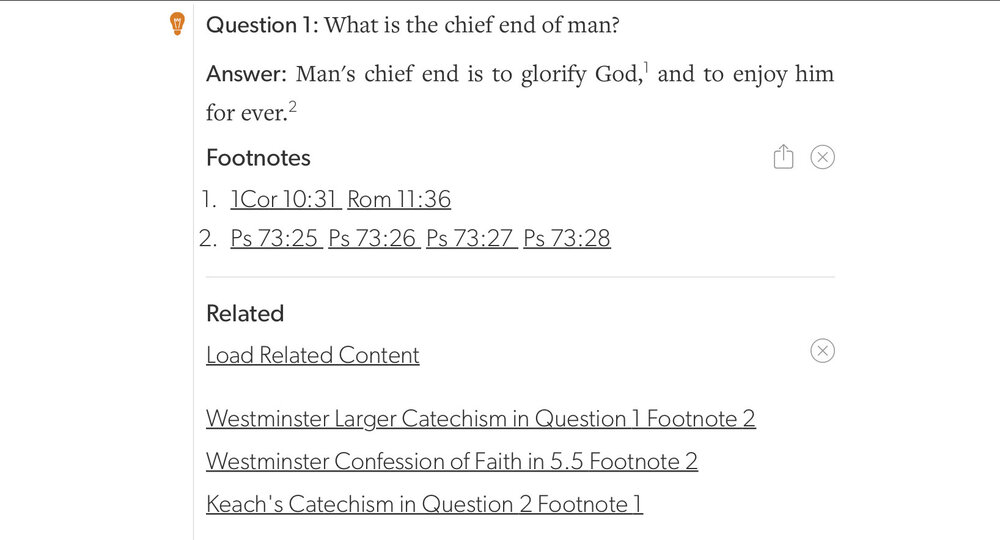 This is a feature that David threw in at the last minute while he was waiting for Sarah to QA the site. Honestly, it was reckless and irresponsible. He knows that now. But on the plus side, you get a new feature!

Related content is basically an attempt to show you content that seems highly relevant to what you’re currently reading. It’s an evolving feature. Currently it looks for things that reference a significant number of the same verses as what you’re currently reading. But we plan to add more things like finding similar phrases, a significant number of the same words, and maybe even some clever AI stuff later. It’s currently supported for catechisms and confessions, but we’re planning to add support for paragraphs in commentaries soon.

It’s annoying to have to scroll all the way to the top of the app to navigate somewhere else. So now the navigation bar follows you, like a little helpful butler. Or something. You get the idea.

iOS lets you add web apps to your home screen like bookmarks. We’ve added support so that when you do this, the web app will open as its own separate thing from Safari in the task manager. To set this up, go to the Relight homepage, tap the Share icon, and tap Add to Home Screen.

It’s not an app yet, but hey, we’re making progress.

Omnify as a Service 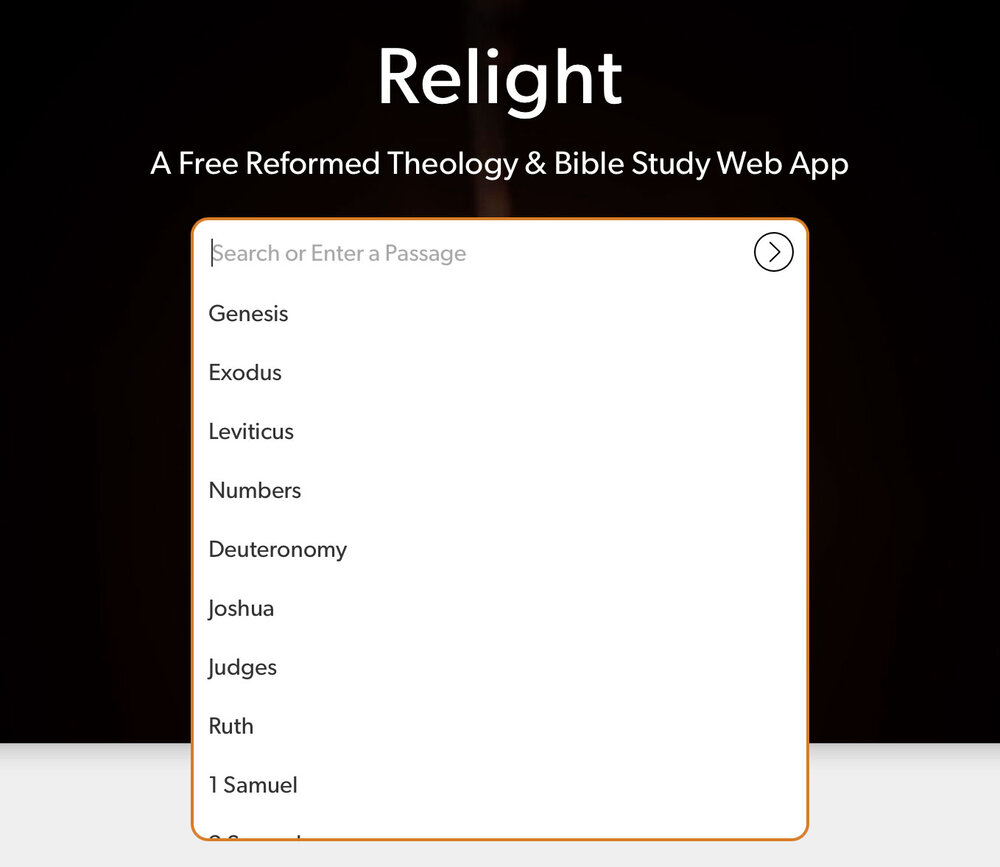 The Omnibar takes whatever you type and tries to figure out where you wanted to go. If you type wcf 25 it takes you to Chapter 25: Of the Church. If you type gn3 16 it takes you to Genesis 3:16. We call the magic it does behind the scenes "omnifying" because making up words is one of the best parts of making an app. Well, now you can omnify things from anywhere!

We’ve created a sort of API, where if you go to https://relight.app/omnify?q=gn3 you’ll go to Genesis 3. Lots of developers will be able to do lots of fancy things with this. David has already started making integrations with iOS Shortcuts and Alfred for macOS. We’ll shortly release a tutorial on how to set this up with your favorite browsers and automation tools, so you can open your browser and just type relight gen3 to go straight to Genesis 3 without having to see the pretty candle on our homepage.

A lot of the work David did was work that was necessary toward making our most requested thing: a native app. To make Relight, David has had to learn Javascript, JQuery, VueJS, Nuxt, Python, FastAPI, and Neo4J, Cypher, and probably more things he can’t even remember. To make an app for iOS, he’ll have to learn (and has already started on learning) Swift and SwiftUI, as well as Xcode. There are more languages and tools involved for Android. This is going to take time, but we are working on it and this update represents some non-trivial progress toward native apps.

An Update on the Lack of Updates

Sorry it’s been a minute since our last update. You know what they say, when it’s rains, it kicks you in the teeth and steels your wallet.

Essentially, this post is an apology for the lack of updates, and perhaps something of an explanation so you can continue to feel warm and fuzzy about the project and its continuation.

The explanation is essentially that life has become quite unwieldy. When we moved to Colorado about eight months ago, our internet was slow but useable. For various reasons, all of which have been entirely outside of our control, it has gone from slow-but-usable to unusable-but-slow. Or something like that. David will spare you all the details of how long-range directional WiFi is a thing, how it can’t penetrate the turbidity generated by record-setting forest fires, the unbelievable latency caused by satellite internet needing to send your data to space and back, or the unreliability of LTE services like T-Mobile when you live just to the left of the middle of nowhere. We’ll even spare you the “B-plot” of David needing to have his MacBook Pro’s logic board replaced three times across two computers. Some viewers will just think we jumped the shark at that point.

Anyway, suffice to say that as a web developer, David needs the internet to do his job. This combined with the unprecedented COVID times and Starbucks not being open for freelancer squatters has made it very difficult to get our hustling done, side or main.

The good news is that we will shortly be moving to a land flowing with gigabit Ethernet. The kind of connection that feels like it downloaded that cat video before you even knew you needed to watch it. There will be a couple more weeks of slow progress while we move boxes from point A to point B, but after that, you can expect work to progress quite quickly as both of us miss working on Relight and are very excited to get back to it.

During church service limitations, we thought a lot of churches might be wondering how to make sure everyone attends services equally, but also get to see as many other congregants as possible. So, we created a free tool to help churches do just that!

Sarah explains the basic features of the app and offers some tips for navigating around faster.

We finally feel like we can legitimately call Relight a reformed theology and Bible study app. Check out our exciting new update and share Relight with your friends!

Mostly at Sarah’s request, the WCF’s footnotes are now accessible both by tapping directly on the footnote itself, or by opening the lightbulb.